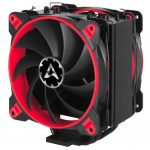 As a leading manufacturer of cooling systems for personal computers and the eSports industry, ARCTIC, Inc. has been a well-established business in Europe and Hong Kong for more than 15 years. Since that time, the company has expanded its product line into consumer electronics products, including monitor arms and other computer accessories.

It was a natural transition, then, to begin exploring the possibility of branching into the technology-driven North American market. After more than a year of research, the Germany-based ARCTIC team responsible for spearheading a new U.S.-based operations center knew they wanted to be on the East Coast. They had even narrowed their choices down to three states: Virginia, Pennsylvania, and South Carolina.

Regions of all three states had the port infrastructure ARCTIC needed to get their new startup running. However, there were several overwhelming impressions that led the team to choose South Carolina, and Florence County, specifically.

“Honesty, quality workforce, and, most importantly, availability of an immediate work space in the Gould Business Incubator,” according to Denise Stein, ARCTIC Vice President of Analytics and Administration.

The county tour sealed the deal after they included a visit to the SiMT and the Gould Business Incubator, which had the ability to provide ARCTIC with a furnished office with internet access and connections to local resources.

“It was the honest impression about what South Carolina had to offer that gave me the feeling this was the place for us,” Denise said. “Then, when they showed us the SiMT and the business incubator we knew we had found a place that would allow us to hit the ground running. That was vital to us in starting a business in a foreign country, because we did not have time to worry about basic necessities like furniture and wi-fi when we would be so busy with other hurdles like business licenses and warehouse space.”

With professional office space and available meeting rooms, the incubator allowed ARCTIC to immediately begin interviewing to hire key team members through incubator graduate, Recruiting Solutions. Even after securing warehouse space in Quinby, the team continues to use its incubator office during warehouse remodeling and frequently holds external business meetings and product training courses for employees in the efficient and technology accessible meeting rooms.

In less than six months, ARCTIC has established a strong foothold in the North American market thanks to its ability to quickly house and train employees in the hassle-free, ready-to-go, professional environment of the Gould Business Incubator.