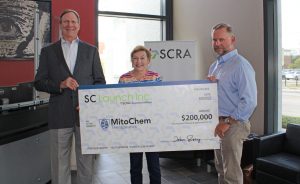 MitoChem Therapeutics became an SCRA Member Company in 2019 and received a $25,000 Academic Startup Grant. It became an SC Launch Inc. Portfolio Company with this investment. MitoChem has also been a long-term tenant at SCRA’s Innovation Center in Charleston.

Founded at the Medical University of South Carolina, MitoChem Therapeutics was started by two scientists who saw an opportunity to focus on developing treatments to address the effects of cellular and metabolic dysfunction in neurodegenerative conditions, specifically eye diseases.

“MitoChem identified a key driver in vision loss and developed a new class of small molecules to treat neurodegeneration by protecting mitochondria, the ’powerhouse of the cell.’ They are pin-pointing metabolic and oxidative stress caused by aging, genetics, or environmental factors,” said Will Cruz, SCRA investment manager.

“The visual system ranks among the highest in the body for energy consumption. It is particularly vulnerable to deficiencies in energy metabolism, which is central to disease pathology. Our compounds are designed to protect cellular metabolism to halt or slow neurodegeneration. SCRA and SC Launch Inc. have entrusted their support to us because they understand this groundbreaking work is bringing world-class expertise to the treatment of eye diseases,” said Michael Voevodsky, MitoChem Therapeutics president and CEO.

“Eye diseases represent a significant and growing untreated patient population, and MitoChem’s development will be able to treat many of these patients with a patient-friendly topical delivery,” said Bob Quinn, SCRA executive director. “MitoChem is simultaneously enabling studies for the treatment of several eye disorders including retinitis pigmentosa, age-related macular degeneration, and glaucoma.

MitoChem was recently featured at the Mitochondrial-Targeted Drug Development Summit in Boston. Their presentation was titled “Mitochondrial Protective Therapeutics for Neurodegenerative Diseases,” which addressed mitochondrial dysfunction as a hallmark mechanism across rare and challenging diseases.