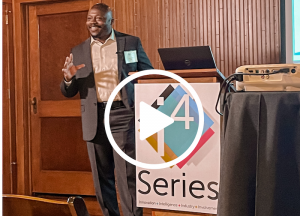 When Wilson grew up in Andrews, SC, he didn’t have access to computers at school. He says it was challenging as a new 11th grader at SC Governor’s School for Science and Mathematics (GSSM) to learn he could actually “tell computers what to do.” After graduating from GSSM in 1999, Wilson’s next move was to become a computer engineer and then a patent attorney. Ultimately, he landed at Google as the Senior Director for Government Affairs and Public Policy. Wilson says GSSM laid the foundation for his love of overcoming difficult challenges and helping solve some of the world’s biggest problems. He was named Outstanding Alum in 2020.

At Google, Wilson advises lawmakers, regulators, and thought leaders across the globe on the rapidly changing mobile landscape and the societal implications of emerging technologies. Press play to hear more about Wilson’s rise to success, how Google invests in startups and late-venture companies, and find out what he sees as opportunities for businesses to scale with technology.